Nicotiana tabacum, or cultivated tobacco, is an annually-grown herbaceous plant. It is found in cultivation, where it is the most commonly grown of all plants in the genus Nicotiana, and its leaves are commercially grown in many countries to be processed into tobacco.

It grows to heights between 1 and 2 meters. Research is ongoing into its ancestry among wild Nicotiana species, but it is believed to be a hybrid of Nicotiana sylvestris, Nicotiana tomentosiformis, and possibly Nicotiana otophora.

he plant is native to the Caribbean, where the Arawak/Taino people were the first to use it and cultivate it.[citation needed] In 1560, Jean Nicot de Villemain, then French ambassador to Portugal, brought tobacco seeds and leaves as a “wonder drug” to the French court.

Nicotiana tabacum Linné is a robust annual branched herb up to 2.5 m (8.2 ft) tall, with large green leaves and long, trumpet-shaped, white-pinkish flowers. All parts of the plant are sticky, being covered with short viscid-glandular hairs which exude a yellow secretion containing nicotine.

Tobacco leaf surface under an optical microscope, magnification 100x:
1. Trichomes
2. Epidermal cells
3. Stomata
Varied in size, the lower leaves are the largest at up to 60 cm (24 in) long, short-stalked or unstalked, oblonged-elliptic, shortly acuminate at the apex, decurrent at the base, the following leaves decrease in size, the upper one sessile and smallest, oblong- lanceolate or elliptic.

In terminal, many flowered inflorescences, the tube 5–6 cm (2.0–2.4 in) long, 5 mm (0.20 in) in diameter, expanded in the lower third (calyx) and upper third (throat), lobes broadly triangular, white-pinkish with pale violet or carmine colored tips tube yellowish white; calyx with five narrowly triangular lobes which are 1.5–2 cm (0.59–0.79 in) long. A capsular ovoid or ellipsoid, surrounded by the persistent calyx and with a short apical beak, about 2 cm (0.79 in) long. Seeds are very numerous, very small, ovoid or kidney shaped, brown.

Almost every part of the plant except the seed contains nicotine, but the concentration is related to different factors such as species, type of land, culture and weather conditions. The concentration of nicotine increases with the age of the plant. Tobacco leaves contain 2 to 8% nicotine combined as malate or citrate. The distribution of the nicotine in the mature plant is widely variable: 64% of the total nicotine exists in the leaves, 18% in the stem, 13% in the root, and 5% in the flowers.[citation need

The History of Tobacco.

Tobacco was first discovered by the native people of  Mesoamerica and South America and later introduced to Europe and the rest of the world. Tobacco has a long history from its usages in the early Americs. It increased in popularity with the arrival of Spais to America, which introduced tobacco to the Europeans  by whom it was heavily traded. Following the industrial revolution, cigarettes were becoming popularized in the New World as well as Europe, which fostered yet another unparalleled increase in growth.

If the four plants of the Americas that spread to the rest of the world in the Columbian Exchange—potato, maize, tomato, and tobacco—the last is the only one used in every country. Greek and Roman accounts exist of smoking hemp seeds, and a Spanish poem c. 1276 mentions the energetic effects of lavender smoke, but tobacco was completely unfamiliar to Europeans before the discovery of  the New World. Las Casas vividly described how the first scouts sent by Columbus into the interior of Cuba found.

Following the arrival of Europeans, tobacco became one of the primary products fueling colonization, and also became a driving factor in the incorporation of African slave labor. The Spanish introduced tobacco to Europeans in about 1528, and by 1533, Diego Columbus mentioned a tobacco merchant of Lisbon in his will, showing how quickly the traffic had sprung up. Jean Nicot, French ambassador in Lisbon, sent samples to Paris in 1559. The French, Spanish, and Portuguese initially referred to the plant as the “sacred herb” because of its valuable medicinal properties.

Nicot sent leaves and seeds to Francis II and his mother Catherine of Medici, with instructions to use tobacco as snuff. The king’s recurring headaches (perhaps sinus trouble) were reportedly “marvellously cured” by snuff (Francis II nevertheless died at seventeen years of age on December 5, 1560, after a reign lasting less than two years). French cultivation of herbe de la Reine (the queen’s herb) began in 1560. By 1570 botanists referred to tobacco as Nicotiana, although André Theve claimed that he, not Nicot, had introduced tobacco to France; historians believe that this is unlikely to be true, but Thevet was the first Frenchman to write about it.

Swiss doctor Conrad Gesner in 1563 reported that chewing or smoking a tobacco leaf “has a wonderful power of producing a kind of peaceful drunkenness”.[6] In 1571, Spanish doctor Nicolas Monardes wrote a book about the history of medicinal plants of the new world. In this he claimed that tobacco could cure 36 health problems,[8] and reported that the plant was first brought to Spain for its flowers, but “Now we use it to a greater extent for the sake of its virtues than for its beauty”. 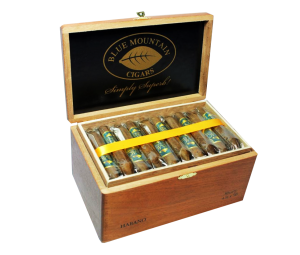 The premium Shorty cigar is blended from filler & binder blend of tobacco from the Jalapa and Estelí regions of Nicaragua. This delicate blend results in a tasty but smooth medium flavor, light on the palate and perfect for any occasion. Available in your choice of beautiful wrappers: Nicaraguan Habano, Nicaraguan Maduro or Ecuadorian-grown Connecticut.

Power and flair are the essence of El Macho. This full bodied cigar is for the experienced aficionado with taste and style in mind The Nicaraguan blends put forth the true measure of confidence with a perfectly constructed shape and magnificently bold taste.

Experience the joy of warm Caribbean breezes, refreshing rum and a fine cigar all at once with the tropical treat. Both the tips and ends of these cigars are dipped in delicious five year old Jamaican rum and sun dried by the warming rays of the sun, without the fillings being flavored. The beautifully constructed cigars are then transformed through a meticulous curing and aging process in oak rum barrels that lock in the complex and satisfying flavors. 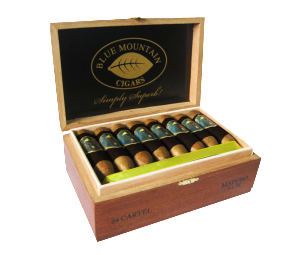 A cigar of superior distinction, El Cartel is a cigar that commands attention with its unique design and flawless construction. Well aged Nicaraguan tobaccos are blended with precision to create a cigar for the keen connoisseur that is both bold and sophisticated. The El Cartel is oozing with mouthwatering flavors of cream and luxurious spices that are sparked by slight, but lively hints of leather, oak and pepper to create a full bodied smoke without harsh or bitter undertones. 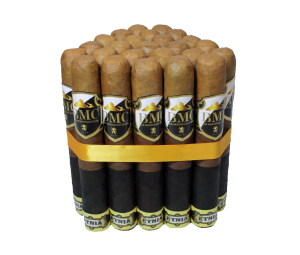 Anniversary is a new and exclusive creation will surely please. Born from the fertile soils of the world famous Jalapa region, the perfectly aged Nicaraguan binder and filler are complimented by a uniquely enchanting dual wrapper of Nicaraguan Habano and Connecticut wrappers. 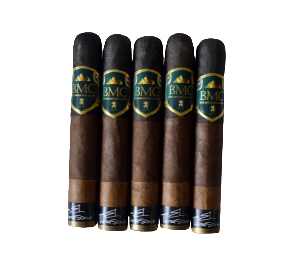 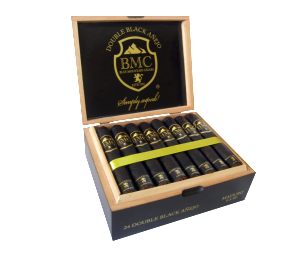 One of our new offerings is a medium strength cigar with a lot of character, body and natural sweetness.  Covered with a Nicaraguan Habano wrapper, it comes in 2 sizes, both of which present with a stylish stud to complete the look. And for those with a softer palate, it is also available with a Connecticut wrapper, which lowers the strength, while maintaining the desired unique characteristics of the blend.

You must be 21 years old to visit this site.